“What makes the desert beautiful,” said the little prince, “is that somewhere it hides a well.”
The Little Prince, by Antoine de Saint-Exupéry

Youthreach believes it serves as the pathfinder to such wells in each of us.

Environment is one of the key areas of our Awareness Programme. We have worked consistently on several environment initiatives to build awareness and sensitise people on related issues.

As part of our initiative to care for the environment and save trees in cities, Youthreach has undertaken several activities, such as wilderness walks, tree painting workshops, musical performances, films, and poetry readings – all of which explore the deep and delicate connection between man and nature.

BRIDGE TO THE RIDGE
Youthreach has been organising Ridge walks in order that citizens learn about the threats that the Vasant Vihar Ridge belt is facing. Led by environmentalist Vikram Soni, these walks have been absolutely new experiences for many participants, who have gone into a real forest for the first time, spotted a hyena and seen various water bodies and naturally dug-up caves.

Youthreach also hosted a talk ‘Save Delhi’s Ridge Forest’ by Vikram Soni on the problems that the Ridge has been currently facing. This was followed by a film titled ‘On the Brink.’ The film spoke at length about the past and the present of the Vasant Kunj Ridge forest belt. 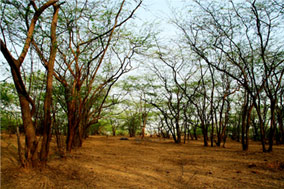 WALKING IN THE WILD
Discovering a sacred forest, learning the name of a shrub or a tree, spotting a Neel Gai in the wild and witnessing the mating ritual of a Black Buck… wilderness walks help people marvel at the rich and lush heritage of nature and make them aware of natural spaces around which they live but don’t ever ‘see’.

Eminent environmentalists such as Pradip Krishen have taken groups of people to Mangarbani, a sacred grove some kilometres across the Haryana border. A small, steep valley, this is a 300-400 acre wilderness in the midst of the bustling city and untouched, yet, by human meddling. However, it is only a matter of time before Mangarbani, too, faces annihilation.

Other walks have been led by Sajeev TK to the Asola Bhatti Wildlife Sanctuary. The sanctuary is located in South Delhi district, on the Northern terminal of Aravalli Hills, which is one of the oldest mountain systems of the world. This magnificent wilderness area, near Tughlaqabad Fort, is spread over 6,800 acres. The sanctuary is home to over 700 species of plants and hundreds of wildlife genus, including 193 species of birds.

Youthreach has also organised walks led by environmentalist Faiyaz Khudser to the Yamuna Bio-diversity Park. The park was planned as a heritage site and is a repository of approximately 50 threatened ecological communities of the Yamuna river basin. It serves as an ideal alternative habitat for migratory and resident bird species that come mainly from Siberia, and also from China, Europe and the upper regions of Ladakh.

Talk the Walk
The Mangarbani introduced to me through the Youthreach wilderness walks is indeed an unbelievable patch of nature which I escape to intermittently to de-stress and rejuvenate myself. -Anup Behl

The walks have been absolutely superb, especially the ones to the forests of Mangarbani and on the banks of the Yamuna. I enjoy your outdoor activities the most because they give us urban people the opportunity to step out of our boundaries and explore the outdoors, besides meeting some very nice and interesting people. -Nilanjan Gupta 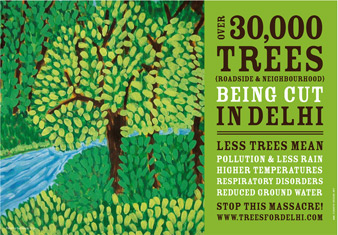 A few years ago, Youthreach joined the campaign to protect the trees of the city when we saw how this alphabet was being erased from the roadsides of Delhi. ‘Trees for Delhi’ was an action group formed by some concerned citizens and environment NGOs, who came forward to launch a drive against the mass destruction of trees taking place in the city. As part of various initiatives of ‘Trees for Delhi’, Youthreach organised a candle-light vigil against the extensive tree felling at Chirag Delhi and Greater Kailash crossings.

Major newspapers wrote about the event extensively and television channels, like Aaj Tak, NDTV, and CNN IBN, covered it. As a result, Chief Minister Sheila Dixit met the ‘Trees for Delhi’ group to discuss future plans for the campaign. 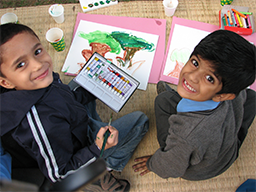 TREE PAINTINGS IN THE PARK
Amidst the lush green trees and flowering beds of the gardens of Delhi, Youthreach has organised art and meditation workshops so people may appreciate the natural splendour of the city and celebrate its beauty. We held these workshops in New Delhi’s Lodhi Gardens, the Rose Garden at the Deer Park and at the Global Arts village.

A ‘Natural’ Memory…
Youthreach gave me the most pleasurable afternoon at the Deer Park. The children came out with such creativity and made a beautiful variety of trees, plants, flowers and even grass. It was beautiful and nature had made me create it. Nature does speak to us, if only we listen.
– Nanita Sharma

I have never enjoyed an afternoon as much as the tree painting workshop organised by Youthreach. Both my daughters and I thoroughly enjoyed the tree meditiation and painting out in the open amongst flowers and birds and bees. It gave a momentfor all three of us to reflect how important trees are to us – Radhika Bahl