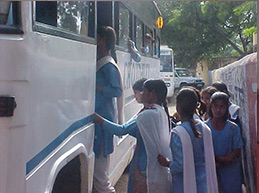 At Youthreach, we like to believe in the boundless potential of the human spirit. The communities we have had the fortune to access as part of our work through our Corporate and NGO partners have given to us fascinating stories of that potential. Whether it was a child who returned to school after eight years, a young girl who defied social norms to take a bus to a far away school, a woman who made paper bowls to ensure a decent life for her family, or a teenager who beat paralysis from disabling his life… each person is a story. This section brings you a few stories of the unlettered, under-confident, underprivileged and marginalised… and their rise, their transformation. We are proud we have been part of these lives even though we have merely facilitated the change. To quote Emerson, they dipped their pen in the blackest ink because they weren’t afraid of falling into their ink-pot!

Premwati Learns to Read
Premwati, a 65 years old resident of Bhagtowali village in Narsan Block, Haridwar district, had never been to a school and was very hesitant to join the Adult Literacy Centre. However constant motivation, inspiration and home visits by the Youthreach team persuaded her to join the programme. Once she joined the centre she attended and participated in the class with full zeal and despite her age, she was the best among the lot. With her hard work and dedication, it is heartening to see that she has now learnt to read and write. Premwati not only enjoys reading the newspaper but also helps her grandchildren with their studies. Today she has become the role model for other women in Bhagtowali village.

Jyoti Achieves her goal
Jyoti, a young confident girl from UP, joined the Workforce Readiness Programme to hone her soft skills so that she is able to financially support her family and pull them out of poverty. Her father is a taxi driver, who works day and night to make ends meet. She has an excellent academic record and has very clear understanding of the subject she is studying. When Jyoti joined the programme, she came with her own sets of weaknesses. She was a quite short tempered and got annoyed and frustrated on petty issues. Seeing these shortcomings, the trainers tried to help her introspect on her weaknesses and helped her understand the importance of life skills. Jyoti is now financially supporting her family and is determined to support the higher education of her younger brother. In addition to this, she intends to pursue Masters in Management, so that she is able to touch new milestones of success.

Nitesh Dares to Dream
Nitesh, a young 20-year-old girl from Mohammadpur village in Bawal had always dreamt of becoming a doctor. Her father, a worker in the AIS factory encouraged his children to study and motivated them at every step. He made Nitesh join the Unnati Remedial Education centre started by Youthreach. Nitesh diligently attended the remedial centre for support and guidance forher studies in class 8 & 10. She was very punctual, hard working and also motivated other students to come to the centre for remedial assistance. She did extremely well in her board exams and enrolled into Class 11, science stream. She then sat for the MBBS entrance exam which she cleared in the first attempt. Nitesh says all this would never have been possible if it had not been for the assistance the Remedial centre gave her. Today Nitesh is studying to become a doctor at the GB Pant Medical College. Her parents are overjoyed and extremely thankful to the AIS Unnati Centre for bringing light to the lives of so many young girls. 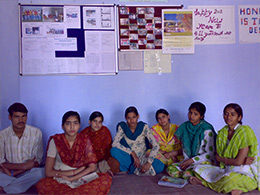 AND THE LAMP OF LEARNING CONTINUES TO BURN
“Madam, college ja rahi ho… padh kar madam banogi ya chulha phukogi.” The mocking words of her peers seeing her go to the AIS Unnati Centre would have cut her deep then. But that was the truth. Jyoti had gone to the nearby government school despite all odds. Failure in class 8, the subsequent dropping out of school sent Jyoti back to doing what most girls in her situation do – cook, look after her siblings and do other household chores. Her father Dayal Singh was a casual labourer in Mohammadpur village in Rewari. So, expensive tutorial back-up was out of the question. Two years went by. And then, truth seemed like it may change.

Jyoti learnt of the AIS Unnati Centre in her village for out of school children when a teacher from the centre and the in-charge informed her family about the facility. There was both trepidation and excitement as the young girl started preparing for the class 10 boards through Haryana open school. As if the books weren’t tough enough, the jibes from her peers made it even more difficult. The teacher and other friends at the Centre, however, were constantly pushing, encouraging and helping. To her own surprise, Jyoti passed the first semester in all subjects. That made her more confident for the second semester in which, however, she passed in only half her subjects. Her constant ally, her teacher, counselled her. Finally, Jyoti cleared her compartment exams – and her class 10. “It was a great day for me. The whole churn seemed like a long journey which would have never happened but for AIS,” she says. 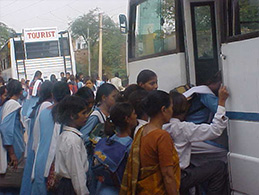 ONE BUS, MANY JOURNEYS
One bus and six lives without stops – that pretty much sums up the story of Leena Kumari who lives 8km away from Bawal (Rewari) in Harchandpur village. Daughter of casual labour father and homemaker mother, Leena belongs to the Dalit community which frowns upon girls’ education. So when she passed out of the village primary school, the young girl found she had little choice but to give up her dream of pursuing commerce and becoming an accountant. Dreams, especially for children like Leena, are like the bloom that withers away as quickly as it flowers. She had five sisters and a brother. Her parents, much as they wanted to, could ill-afford to send her to school where they would have had to spend on tuition and other fees.

But seasons changed – and the year 2004 heralded spring for Leena’s dream. Asahi Glass started a remarkable bus service under its flagship program, AIS Integrated Community Development Programme, for enhancing the quality of life of the people in the vicinity its manufacturing plant. Leena and two of her sisters hopped on to the bus to Bawal for further studies. Her elder sister completed class 12 the next year, found employment in a neighbouring factory in Bawal and began contributing to the household income. Another scored a decent 78 per cent in the science stream in 2008 and went on to do a Bachelors degree in science from Gurgaon. Subsequently, her younger sister also started going to Bawal Girls’ School in the bus. Prior to the bus service, only 10 to 15 girls could step outside their village to pursue further education. The bus service changed the lives of nearly 60 girls (2010-11 figures) – and along with them, of their families as well.

Leena is now in class 12, studies commerce and dreams again… all because of a bus that has stopped nowhere in its journey to fulfill the aspirations of its young passengers. 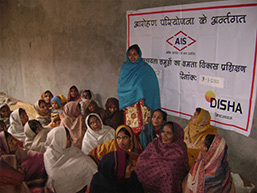 SHAKTI – POWER OF THE COLLECTIVE
Each of the members from their self-help group ‘Shakti’ in Latherdeva village bear out the name of one the oldest women’s groups started under Project Aarohan, an AIS initiative facilitated by Youthreach, in the village communities of Roorkee. They keep their financial records like any capable accountant, fill their own bank documents, and calculate their savings and interest besides writing the minutes of the group meetings. They have their own micro-enterprises, each one of them, and both the tenacity and confidence to face a new world.

The story was different till a few years ago. These women were constantly and completely dependent on their spouse for petty cash, unable to save even a little and always forfeiting small personal joys for the sake of the household. Project Aarohan gave them a measure of self-determination and belief. The project, under which 12 women joined hands to form one of the oldest self-help groups Shakti, aimed at social and economic uplift of the Roorkee women. The group took its first small, but significant, step towards this aim by saving Rs50 per month for the very first time outside the domain of their homes. In February 2006, each of them opened their first bank account in a public sector bank on the basis of their SHG account – and that opened their eyes to the worth of collective power. For a bunch of semi-literate women that was skeptical about its own abilities to run a group and handling money, their maiden visit to a bank without a male member gave them conviction.

They started inter-loaning with the collective savings, initially for domestic consumption. Training in micro entrepreneurship coupled with exposure meetings with other women entrepreneurs and the support from the AIS Revolving Fund spurred them into establishing their own micro-enterprises.
Today, the power of those initial 50 rupees has not only made them economically independent but has given them also a sense of indefatigable self-worth.